The Communist Party of Pakistan announces with deep sense of bereavement pain and profound sorrow ,to all the fraternal parties ,comrades and friends ,that Comrade Chacha Maula Bux Khaskheli ,the Secretary General of the  CC of CPP ,has passed away at 11 PM on 30th August ,2011. He was 76 years old.

The Communist Party of Pakistan offers LAAL SALAM ( RED SALUTE ) ,to comrade Khaskheli for his unforgettable militant struggle and sacrifices for the party and people of Pakistan. 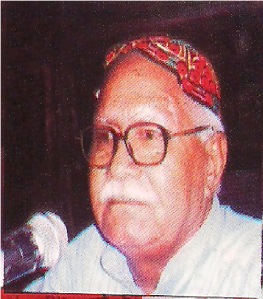 Comrade Khaskheli was born in 1935 ,in the Province of Sindh ,village Kandhra ,Tehsil Sukker ,in a working class family . He had no formal education . He had started his practical life ,since early childhood as construction worker and thus at the age of 27 was employed as mason at Rohri Cement factory ,where he joined the workers union and became member of the working committee of the Cement factory’s workers union ,which was a front trade union of the CPP . In 1966 ,he was elected ,president of the workers union ,where, during the same period a confounding syndicate of different trade union organization was founded by CPP ,called “PAKISTAN WORKERS FEDERATION” AND he was elected its chairman ,which later on in 1988 evolved into “ALL PAKISTAN TRADE UNION ORGANIZATION” ( APTUO ) of which Comrade Khaskheli was elected president and remained leading it till his last breath.

In the meanwhile ,he remained elected as president of the workers federation at the Rohri Cement factory . He also led the anti-privatization committee ,during 1991.

He was elected Secretary General of  the CC of CPP in 1999 and consecutively re-elected and remained  its GS, till his last breath .

Comrade Khaskheli   remained rigorously incarcerated during different dictatorial and bourgeois-feudal democratic periods of  agonizing concerted oppressions and persecutions against CPP for over  5 years and lived close to a decade long period underground .

He will remain immortal among the working  ,downtrodden marginalized masses and  the Communist Movement in Pakistan , for all times to come as an unbreakable  daring militant leader of the working  people .